This is the first post of a series of six where I will be trying to give a simplistic view on the current situation humanity (and most forms of life on earth) is facing. You will also find some resources such as reports, articles, innovations and other findings in relation with the fields of environment, biodiversity, energy and sustainability.

After gathering some critical facts, I will underline a few questions which might come up before laying down the blueprint for the upcoming articles addressing each one of them. I reckon the best of my knowledge might be flawed but I hope these posts can help putting our knowledge in common et this blog can become a platform for exchange, to foster clarity and hopefully lead to solutions towards a more sustainable future.

Let’s start with the beginning!

Where do we Stand?

I like to start with stupid reminders, so here is one: we are human beings. As any other animals, human beings depend on the biodiversity of their environment to survive. May it be for the sustainability of their food supply or the simple maintaining of their health.

The (IPCC) report has underlined unprecedented climate changes. Their impacts on earth will be irreversible for over hundreds of thousands of years. Indeed, as shown in an article from CarbonBrief.org, green-house-gas emissions from human activity will have generated in a 100 years span more important temperatures rise than earth has seen in the previous 20,000 years. Thus, disturbing the fragile natural equilibrium responsible for the miracle of life… In the past 50 years we have already witnessed the tremendous impact of these climate changes on earth’s living populations as shares this WWF report: an average decline of 68% in the living populations sizes.

Unless one’s been living under a rock (or in a slight state of denial) it is a secret to no-one that in a sustainable living world, fossil fuels (as we extract, transform and consume them) are to be largely reduced if not proscribed. However, it is a challenge that the global economy as we know it, isn’t ready to take up yet. In fact, as the main focus for most countries is on economic growth, if we use the GDP as its only measurement indicator, disregarding its energy consumption, a country doing well is a country producing more and more. Not solving more and more problems or better answering the needs of its citizens, but simply producing more. Meaning, by extension, consuming more energy. Therefor, find the below infographic, representing our consumerist society in a relentless race to growth since World War II through the lens of energy consumption.

A few questions may then arise:

How did we get here ?

What would it take to transit to a fossil fuel free world?

Will it actually happen?.. on time?

If it is on time, what will it be on time for and what will be left of the world we know?

In the hands of how many actors is the power to action this transition? Are all these actors aware of the stakes?

Will there be sacrifices? And what if there aren’t any?

What are the short, mid and long term solutions?

These are all questions we will be answering in future posts.

Until then, we encourage you to do your best to minimise your emissions and maximise your impact!

CarbonBrief.org – “How the rise and fall of CO2 levels influenced the ice ages”

Our World in Data – Global primary energy consumption by source 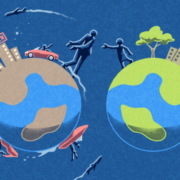