Shading is the 1st enemy against solar panel efficiency

How does the shade affect solar panel system efficiency?

That’s why it’s important to make a shadowing study before installation to avoid any inconvenience. To be noted  that this problem persists even in the very sunny or deserted countries; Shadowing can be due to accumulated dust which creates a serious threat.

First, because the sun goes from east to west from morning to evening, and second because its height depends on the seasons; the sun is higher in summer, generating shorter shadows, and lower in winter, generating longer shadows.

So, how to optimize its production?

There are not a hundred thousand solutions. The one we recommend, in addition to conducting a proper shading study, is simply to equip not a central inverter, but a system with a power optimizer behind each module, the production is managed at the panel level and not at the inverter level, if there is a defective panel or with shading, it will not affect the production of others. 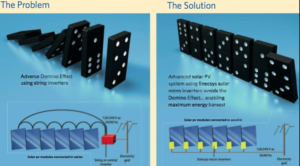